In May the fog in the Aegean is PURPLE !

Last weekend a group of 40 mountaineers from Athens came in Ikaria and walked on the mountain range from one side of the island to the other. I intended to meet them or rather find them somewhere along their way to «spy» on them.

That is, to follow them from a distance just to enjoy the sight. «People in Landscape» : a theme that I have an obsession with.

I also wanted to make them wonder of who I’d be, if they saw me. A shepherdess, a hunteress?  A hiker who follows a better path than theirs? Add up some mystery…

he he
But the weekend was very foggy. Mist covered the mountains, so I assumed that they wouldn’t do it and got back

I had done the same mistake : I underestimated the Greeks.

Not only had they walked the whole

length of the mountain ATHERAS (including some very dangerous passages) in the fog but they also took a dip in a lake with air temperatures 16-20 degrees). On the next day they walked in the canyon of Chalares, they swam in the river pools and then in the beach of Nas.

«People in Landscape». I know this is very important. I can’t explain why right now. Until I do better, see in the map what they did…

so that was you plan; «spy» on people like «the madwoman of the mountains of Ikaria, eh? Red hair would be seen from very far away even in the mist.
Anyway, they were travelling very fast. Too fast for me and far too fast for you. They wouldn’t stop and talk, talk, talk and have smokes and take pictures.
It’s difficult for the Greeks to wake up in the morning, pack and get on the move, but once they do —

-> once upon a time short-legged restless Greeks (armours, shields e.t.c.) walked all the way to India and back.
-> in fact the color of the fog in the Aegean is *salmon*. You can’t see a thing but it’s not scary. Because of this colour you feel ok; good vibrations… In it you sense that the sun reigns somewhere over the clouds.
It was very different during the blizzard on Ikaria in winter, though. Oh yes, it was, man.

ha – I assumed that you were going to react with a comment _:
By «salmon» I translated the french «saumon» which is light greyish purple colour with a touch of yellow in it _: but the flesh of a fresh salmon fish is brighter and more to the orange, isn’t it?

Yep, varies between pale orange and crimson, although we also have races of chinook salmon that are white-fleshed, we call them «white kings,» very rich and highly prized by those who know about them.

These Greeks, they are through-hikers, yes? Bully for them. And you, you are a woman of the misty mountains to a certain extent…

I’m writing very fast and short right from THE island (…no horizon … just the blue). We arrived this morning. Eleni and I are going to smash it ! She is leaving, you know… So we’ve taken an oath to avoid the beaches. So it will be anything else but the beaches. My bf will very useful to break branches, hold us and drag us over boulders, make sure to show everybody that we are «accompanied». There will be no photos from these adventures. We are too big stars, super bums ! 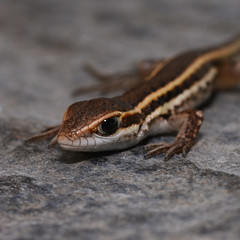 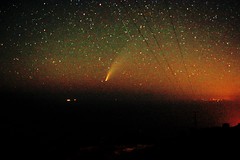 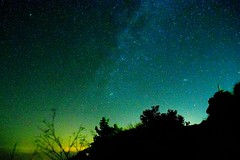