I uploaded some new pictures in Flickr yesterday. Then I found them too dull and decided to live up the scene with some motion. The weather was on my side. There was one of those terrific storms again in the sea and snow fell on the mountains.

However, thalassographs are difficult to take.
‘Πυρ, γυνή και θάλασσα‘ as they say and for once I won’t consider that a sexist statement.

On the contrary I’m flattered.

You will see my ‘thalassographs‘ soon in my page in Flickr. Here you are going to see only the two ones that I will not upload there because they were destroyed -as photos. They were good evidence of the adventure though. So not only I didn’t delete them but I’m posting them here. This is what a blog is about and I’m so pleased.

Hey doc, what’s your opinion as a professional? Is it serious?

I’m sure the doctor understands and will prove himself as efficient as always. Only to help the readers, I’ll just say: do the same thing for another place, not an Aegean island, just any place, Sydney Australia for example or  the Himalayas. You will see so-called ‘highlights’ -better term than ‘sights’- like the Opera, the Everest, the monasteries, taken in different angles, with this in with that out, closeups, farouts etc. What are the ‘highlights’ for Ikaria? There aren’t any, according to me. There’s just an ambience, an omnipresent, in-tune, out-of tune vibration…

So, oh! Muse, chill out in Ikaria. Have a break. There is nothing to sing about.

Have a good rest here. There’s so much drama in this world and fun as well, but you can catch up with all it later. There are no highlights here, no bronze statues of warlord kings with their swords on their stalions (come on now -you know what I mean). Or would you, Muse, sing for a donkey ?

P.S. that there are no highlights doesn’t mean we should allow ourselves to take advantage of this and build and wound the landscape. Of course, modern houses are comfortable. Also, to build a house on the steep slopes of this island has always been an achievement and an owner should be proud.

But please, oh please, afterwards plant trees around the new builidings. Plant as many as possible. Trees like Ikaria -everybody knows that.  I could put down several technical and aesthetical reasons to do so, but I won’t. I’ll just say: do it for me – stupid or not, I’m a good girl !

Ah! Lady Kirki with your offer of wine and honey on a magical Aegean Isle, and such images of surf and foam as Odysseus might have seen as his ship was wrecked and cast upon an alien shore…I shall need the wit of Odysseus here…you have seen my pictures of pig bones in Flikr…the fate I must escape?…Ikarian Enigma…that says it all. What will you dream tonight? Perhaps like another enchantress «I dreamt I was enamoured of an ass», but that was a summer dream.

This was supposed to be a very special night. The night of the brightest full moon or the year!
In fact the full moon of August is brighter (because I think it’s closer to the Earth), but the sky in summer is not so clear as in some nights of January. Anyway I had great expectations for tonight. At dawn it looked as if it was going to snow and because snowfall, though quite often on this island in winter, doesn’t usually last long. So I hoped that we would have the brightest moon of the year travelling in a clear sky and shinning over a white landscape.
Well, it didn’t work out that way. It didn’t snow (yet) and there are big grey clouds in the sky. The moon’s sure shinning bright but we don’t see it. The beams filter through thick snowclouds which are travelling very fast with the north wind. This creates strange light effects -which of course I am not as photo-wise (yet) as to catch with my camera (boohoo-hoo).

From the southern part of the island the moon is very visible, they tell me. There are patches with clouds and shadows and that’s even better -it must look like the   but with the moon instead of the sun. Even if wasn’t tired I wouldn’t drive to Ayios Kirikos on such a night -I’m afraid of frost and ice on them mountain roads. The car is ok, the tires are not (too many drives on stony dirt roads in autumn).
I talk a lot about the weather. Yes I do. It’s a very important ‘factor‘. Not even residents are used to it. They talk about it a lot too and the TV or Radio weather forecasts are very popular. The even have a special way to foresee the weather of the whole year. The system is called ‘merominia» (one day=one month) and it’s based on analogy. They do this in August and if they read the signs well, they are always correct. But one has to be very patient (perhaps also stay awake for 6 days and nights) and very experienced, so it’s usually old men who do this. It’s not a secret, like magic and if you ask they are glad to tell you what they do -just observe the sky and take simple notes every hour for six 24hours. Can you do it? No? I thought so. 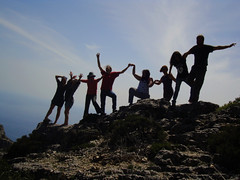 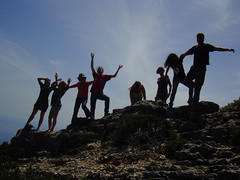 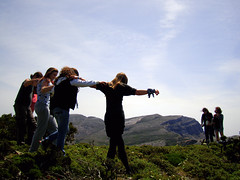 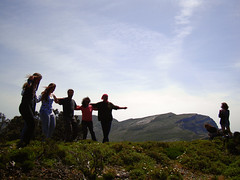