.
Hello readers!
I don’t expect this long article to become too popular. It’s just that several modern-day Ikarians show a lot of interest in knowing as much as they can about the more recent history of the island and they are usually very disappointed. Compared with other islands of the Aegean Sea, there is so little to say about Ikaria! No glorious battles, no illustrious rulers, no forts and fleets, no trading towns, no towers, cathedrals and famous monasteries; only mossy stonewalls and old thrifty houses scattered in the ravines, the valleys and the forests in the hills.
Εxcept one Greek Orthodox clergyman in the 17th century, no other educated person from East or West felt the urge to visit the island and write an account. If I’m not mistaken, the first book about the history of Ikaria appeared in the middle of the 20th century. Until then, there was no big narrative but only countless little stories told by the fireplace; persistent little stories which by force of repetition, became local legends; local legends some of which today, by force of time and culture gap, may sound like wild fairy tales.

Neverthelss, there were some short descriptions of the life in the island during the Obscurity («Αφάνεια») as we like to call in Ikaria the first hard centuries of the Ottoman occupation. These were written by the very few European travelers who touched at our rough, inhospitable shores, often by chance or accident. In Pr A.J. Papalas’ book «Ancient Icaria» I found a reference to one of these documents, which, although brief and trivial, capticated my imagination. It is by Charles Perry, a wealthy medical doctor from England who travelled in the Levant from 1739 to 1742. After visiting Egypt, Perry sailed from Alexandria to Athens. On his way across the Aegean he visited and described the islands of Cos and Patmos. But after that island, as he was heading for Mykonos, his ship was caught in a storm and was forced to drop anchor in Ikaria.

I liked Perry’s account. Reading his one and a half page about his accidental visit to Ikaria, I felt the genuine puzzlement of a man of the Century of Lights for the unwelcoming, extremely mountainous environment of the island and his also genuine astonishment (and contempt) for the attitude and the way of life of its inhabitants. But, most of all, I liked his account for a more personal reason: through the eyes of the good old British doctor, I saw some places of western Ikaria which I know very well, such as Karkinagri, Agios Isidoros and Langada, looking as uncanny and wild, as if we were talking about a remote, unfriendly rock in the middle of the South Pacific!
I found that very exciting! In my mind it fitted in with the other tales of my island and their mixture generated cores for several imaginary storylines! Maybe some day I’ll sit down

«We spent three days in Patmos, not disagreeably; and the fourth in the morning we set sail for Myconos; but the wind, which was otherwise pretty favorable, grew slack, next to a calm; so that it was with much-ado, with what wind we had, and the help of our oars, that we reached the west end of Nicaria in two days. We much lamented our hard fate, that we should thus long want a wind at such a favourable (for it) crisis of the year, it being near the Autumnal Equinox.
However, that night, about an hour after sunset, even whilst we were reproaching the malice of our stars, a fine gale sprang up. We failed not to embrace it immediately, and we went driving on, Jehu-like, with our sails full of wind and our hearts full of joy: But alas! How frail and transitory are human hopes and happiness, especially upon the sea? Within an hour after, the wind turned against us, and blew a storm; so that we were forced to change our course, and to seek shelter under a rock at the west end of Nicaria, which we did not attain, however, without much difficulty and danger.»

«Here we lay wind-bound four nights, and above three days; during which irksome interval we amused ourselves in the best manner we could with fishing: But after we had spent two days without other recreation than fishing, that sport grew dull and tedious; and whilst we were looking out for some sport and divertissement, kind Providence (of its grace and favour) sent us the glad tidings that about a mile off, on the side of a high rocky mountain, there was a spring of excellent water, which was resorted to by great number of partridges. Upon this intelligence, (which we got the third day of our detention there) we immediately got ready arms and ammunition of all sorts, as well for the belly as the barrel -such as bread, butter, cheese, salt, pepper, wine, glasses, etc. We marched on directly, (flushed with the hopes of new game) with uncommon ardour, or rather avidity; and we were well recompensed our pains; for we passed that day very agreeably.
The mountain (though in general very steep) admits a sort of level in that place; and the spring of water issues out of a rock, in a very convenient and delightful spot, where nature or chance has formed a sort of grot, large enough to receive and accommodate a dozen or 15 persons. This natural grot (if we may so call it) is covered over, and secured against the weather, by a large flat stone of about 24 feet in diameter: This rests upon and is supported by other stones on all sides, except to the eastward; where, being open, it presents to view a sort of alcove. Here we passed the whole day (which but for that retreat would have been tedious) very agreeably -reclining upon the bed of our grot, with the water trilling along close by us, whilst our partisans upon the hunt for partridges, wild goats, and the like, of which they brought us in good store.»

«There are some few inhabitants on this island, but those almost naked and savage, seldom seeing or conversing with any of the human species, except those of their own isle. The second day after we put in there, we sent out some of the mariners a shooting for us, who pursuing their game to the north side of the mountain, met with some of the natives. These were so affrighted at sight of strangers, that they fled from them with precipitation; but our people calling after them, and telling them they had brought them bread and corn, they at last prevailed on them to stop, and come to a party with them. These poor wretches, being at length persuaded of our good intentions, came to see us aboard our vessel, and afterwards brought us good store of grapes and meat. We were really at a loss to guess where they found those things; for the whole island, so far as we could see of it, is the most miserable, barren rock that ever was seen.
The 4th day, towards noon, the wind changing in our favour, we set sail for Myconos, which is 40 miles distant from the westernmost point of Nicaria. This (as it is to be supposed) is a run of about 7 hours, with a good brisk gale…»

Pages 484-486 from Charles Perry’s book, «A View of the Levant», which I have arbitrarily named «Wind bound in Nicaria», can be found in Google books

Modern books about the history of Ikaria:

Comments on this article are very welcome!
Ελενη 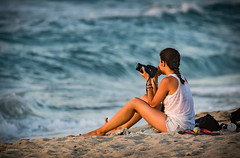 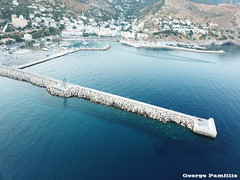 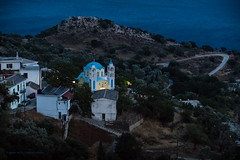